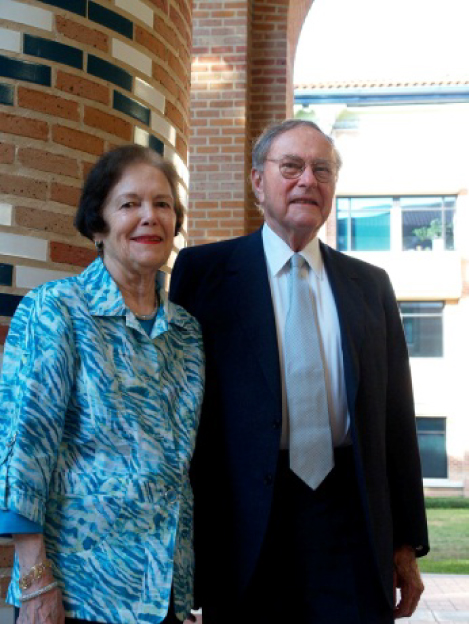 The Eubank Conference on Real World Markets aims to bring together a broad array of individuals interested in financial markets, their role in society, and the ability of quantitative scientists to help understand the complex world of investing. The first Eubank Conference was held in 2009, sponsored that year and in the years that followed with annual gifts from Rice Trustee Emeritus J. Thomas Eubank and his wife Nancy.

Mr. Eubank began practicing law with Baker Botts in 1954, became a partner in 1966 (senior partner in 1979), and was head of the business and estate planning practice for 25 years before retiring in 1991. He worked in private practice for eight years, but then rejoined the firm in 1999 as senior counsel. Mr. Eubank graduated from Rice University with a B.A. in 1951, and continued his education at the University of Texas School of Law to receive his J.D. in 1954.

Mr. Eubank’s primary focus throughout his legal career has been the development of innovative estate planning and taxation techniques, such as the family limited partnership. He is widely recognized for his in‐depth knowledge of probate matters, trusts, estates, charities, and related tax issues.

Mr. Eubank is married to Nancy Moore Eubank, a 1955 Rice alumna. She graduated from Rice University with a B.A. in romance language. They have four grown children: John (Rice ’83), Stephen (Rice ’91), Marshall, and Laura.

Mrs. Eubank has served on numerous Rice boards, including the Association of Rice Alumni Board, the Rice University Fund Council, the Shepherd School and the Friends of Fondren Boards, and her Golden Anniversary Class Scholarship Committee. She was Dean of Women from 1959 to 1961 and has served as an alumni interviewer. In 1996, she received the Meritorious Service Award.

For path breaking research in splines and nonparametric statistics, exceptional teaching and mentoring

For excellence in research, teaching, and leadership in sports analytics

For leadership, path-breaking research, teaching, and mentoring in economics and statistics

Professor of the Practice in Statistics, Rice University

For the development of a highly successful MStat program with global reach, contributions to CoFES and his research in anti-efficient markets

For innovation in multivariate data driven answers, exceptional leadership and service to statistics, and expert and compassionate mentoring of the next generation of statistical leaders

For his service as a super teacher, his example of being a successful and ethical businessman, his fearless devotion to objective inferences based on facts, his service to Rice University, and the field of finance and entrepreneurship

For his data based analyses of various economic systems, for his explications of supply side economics, for his publications and presentations that have viewed economics not as a dismal science but as a bright one

For innovation and leadership in statistics and transforming portfolio design